skip to main | skip to sidebar

Emily is the latest (completed) collaboration between myself and Tim Courtney. He has detailed the lengthy production process on his blog here.

A bit of backstory - I wrote the script as part of a project designed to give myself and Tim something to direct that we didn't write i.e - I write for him, he writes for me. As it panned out there were issues with the content and ambition of Tim's script 'Register' that meant we had to shelve it for now. At which point we made the decision to take on my script for Emily as a joint directing project.

I strongly believe in the notion 'nothing in = nothing out' when it comes to creativity. By which I mean we all need fuel for the fire, inspiration. The main concern is not to imitate the inspiration but rather feed the machine a balanced diet of films, books, images, culture, etc - chew it up, digest it and then output something that is more than the sum of it's parts. Bring something different to it. At the time I was watching a lot of Korean revenge cinema and a key influence was the Vengance Trilogy by Chan-wook Park. I wanted to take this extreme example of the loss of a child and the torture and interrogation of the potential kidnapper/murderer and set it against a domestic background. I wanted these characters to be good people forced to do bad things. This is reflected in every aspect of the production design. The chair they tie the guy to is from their kitchen, he's tied with belts, he's in their garage, the knife used is seen in an earlier dinner scene. There are other references in there; the structure is influenced by Amores Perros and 21 Grams and the final shot (after/in the credits) is a visual and emotional cue to David Cronenberg's History of Violence. We lucked into some things with the location, for example there was a framed poster for the film 'Closer' in the hallway which seemed apt as we set a scene depicting emotional distance between the couple there.

It's been a long time coming but I'm glad we finally have a version to show to everyone who has waited so patiently for us to pull it together. It was a great shoot, with a close cast and crew. I would like to echo Tim's thanks to all the relevant people - this project would not have been possible without you. Thanks to Tim for encoding this version and he's also responsible for the above artwork. Any comments/feedback is welcome as always.

Emily from Tim Courtney on Vimeo.

Posted by Shaun Hughes at 16:48 No comments: 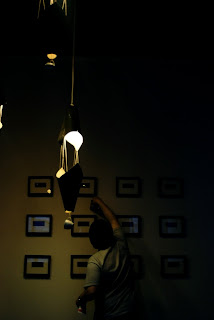 Hanging - It was a long day that Sunday. We were hanging the show for 7 hours. I owe a great debt to Tim and Becky for there help. As I said on the day, they couldn't have done it without me. I'm eternally grateful. I've also been told that nobody has ever taken that long to hang a show. I was proud of this achievement as I felt the work wasn't just thrown up quickly, but rather, everything was well considered. (And I'm lucky that the staff and management at Kilau were kind enough to accommodate me.) 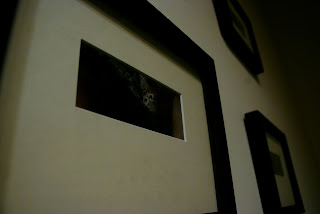 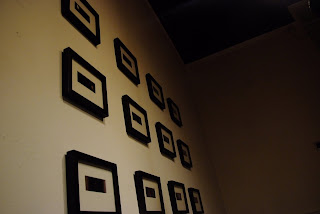 These 12 film stills were the most difficult to frame and select. I wanted them to tell the story of the film in images and run in sequence. Initially there were a lot more but I managed to narrow it down to 12 eventually. The layout is also inspired by the grid layout of my storyboards. Initially I was going to have them in a straight line around the room but after tim had seen and commented on the layout of the images on my laptop this formation stuck. 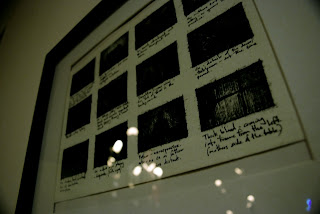 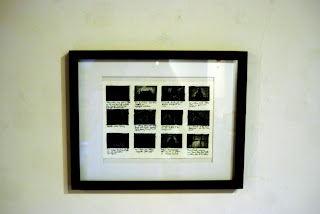 My storyboards are notoriously dark and scribbly and really only decipherable by me (at the time of shooting that is, often people look at them after they've watched the film and go "oh yeah, I see it now", but certainly don't see them as a blueprint in the way I do.) 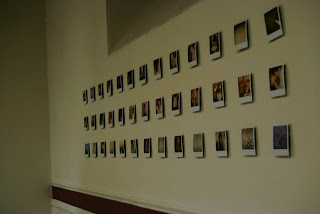 The polaroids took longest to hang. There are 39 of them arranged in an order that illustrates certain scenes essentially trying to tell the story of the film in a different medium. They are hung so as to appear floating about an inch out from the surface of the wall. As you can see above the polaroid to the top right was being stubborn as hell. I think I straightened it 4 or 5 times during the opening. 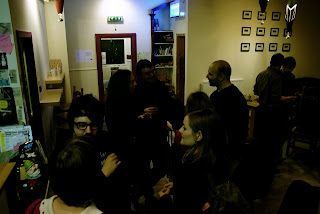 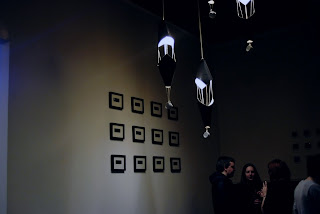 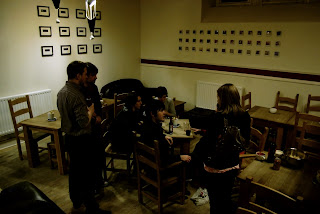 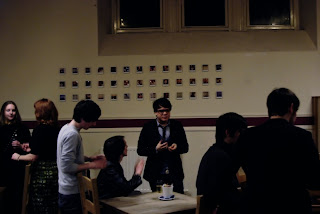 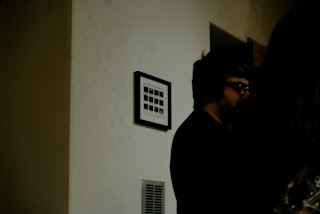 The opening went really well and I was relieved when people turned up. I had a lot of interest in the film and some good feedback on the show itself. Through speaking with the owners Eion and Craig there is a possibility for the film to be shown in Kilau as part of the show on the last day of the show. Once this is confimed I'll advertise it and shout about it more, until then watch this space.

All photo's copyright Tim Courtney - please visit his blog everything in between. He's always got interesting stuff going on through his film, music and art work.

For more on Kilau Coffee visit their site here or stop in to the shop on Little Belmont St in Aberdeen.
Posted by Shaun Hughes at 16:36 No comments:

mother
by shaun hughes
This show chronicles the making of ‘mother’, my 1970's set short film about a family torn apart by the wife/mothers suicide. The film focuses on the relationship between the father and daughter characters in the wake of the loss, and shows how in their grief the daughter falls into her mother’s place.

In a bid to attain a period aesthetic using modern equipment we shot the film using prime lenses from the 70’s and used an adapter to attach them to a Sony HVRZ1 High Definition camera. This kit was provided by Dave Falconer of Falcon Audio Video (www.falconaudiovisual.co.uk). Dave also served as cinematographer on the project.

Making this film was truly a collaborative experience with Richard Browne holding dual responsibilities of lighting and sound as well as taking some production photos. Caroline Smith produced the film as well as playing the mother character. My girlfriend Becky Wheeler came onboard as production assistant and photographer.

In front of the camera Lindsay Cromar and Sarah Birtles also delivered as the father and daughter respectively. Tim Courtney, of the band Katerwaul, provided the film’s score.

The film is still in post-production after which I will put it on the festival circuit and look to get it screened as widely as possible. For now I hope this show can act as a preview and as a glimpse into my filmmaking process.
Posted by Shaun Hughes at 15:35 No comments:

This is an example of some older storyboards from my short film 'adrift'. They are typically dark and scribbly. Not many people can decipher them which is fine as they're mainly a guide for me and an early editing tool. Click to enlarge.
Posted by Shaun Hughes at 21:40 No comments: 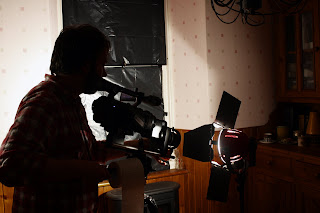 So... halfway through shooting for 'mother', my 1970's set short film about a family torn apart by the wife/mothers suicide focusing on the relationship between the father - daughter characters in the wake of the loss. Had another 2 days shooting scheduled but it fell through due to personal circumstances of one of my actors. That's the way it goes and can't be helped. Looks like it'll be January before we resume shooting which may provide continuity problems aplenty.

I've plenty to do in the meantime though, editing the footage I have and going over music with Tim.

The photo was taken by my girlfriend Becky who came onboard as production photographer. At this point the crew had abandoned me and my desire to perfectly capture dust in the light. I shot about 15mins of footage for a 10sec shot. But I was happy.

Note the strategically placed toilet roll on the tripod pan handle. This is for my cameraman on this project, Dave Falconer, who was unfortunately allergic to all of the many animals in and around Caroline's house. This allows him to be ultra efficient. What a pro.
Posted by Shaun Hughes at 17:01 No comments:

Inspired by some friends who have done the same, I plan to use this blog to compile various creative ideas across different artforms, possibly get some feedback and highlight things that inspire me. I have a lot of projects, thoughts and ideas knocking around in numerous sketchbooks and notebooks (I have a thing for nice looking notebooks - I'm addicted!) and many other ideas floating undocumented. I make films, take photographs, write, draw and supposedly paint (it's been a while) and it takes a lot to keep my ideas in some kind of order so I generally don't. Hopefully this will change that.
Posted by Shaun Hughes at 11:56 No comments: